In the last post I looked at how Lambert Disney came to have his head cut off by a train in Shugborough Tunnel near Stafford in December 1867. The outstanding feature of Disney’s life in Stafford was therefore his unfortunate death, but this post looks a bit further into his family and connections, and the significance of the case for the Irish immigrant story. [1]

Extract from the report of Lambert Disney’s death in the Birmingham Daily Post, 16 December 1867

Disney had married Anna Frances Henrietta Battersby in 1835. The marriage took place at Laracor near Trim where the Battersbys were tenants of Lambert’s father Thomas in Freffans townland.[2] Disney owned almost all of Freffans but the Battersbys leased land extensively in the area and almost certainly operated as middlemen, renting in turn to Catholic sub-tenants. Lambert and Anna went on to have at least two children. The first was a daughter born in 1839 who was rather secretively listed in the 1861 census with only her initials – C.L.[3] The second was a son, Lambert John Robert, born in 1842. These children grew up at the family house, Clifton Lodge, in Athboy. They would have seen their father’s work during the Famine and also his serious illness afterwards. When he gave up his job as agent we can assume his employer gave Disney a gratuity, but he had to find alternative employment, and that meant leaving Co. Meath.

It was at that point that an associate, Trench Nugent, came to play a fundamental role in their lives. The Nugents were an extensive landed and military family from Co. Westmeath. Although Eyre Trench John Richard Nugent was born in Paris in 1820 to John Nugent, a colonel in the British Army, the Nugents held extensive land in Co. Westmeath close to Disney’s home in Athboy.[4] Indeed, Trench Nugent had a small property in Athboy.[5] The two men were associates in the same Ascendancy circle, but Nugent was even better connected. In 1848, for example, he was hob-nobbing with the aristocracy at a charity ball for Kells Fever Hospital.[6] Five years later, in May 1853, he was commissioned in England as a captain in the Second Regiment, Duke of Lancaster’s Own Militia at Preston.[7] That was Disney’s chance. Just nine months later, ‘Lambert Disney, gent.’ was commissioned into the same regiment.[8] Nugent had got him the job despite the fact that he had no recorded military experience. His contacts as well as his work as an agent handling money and accounts had come to his aid.

The Militia Barracks, Stafford, where Lambert Disney and Trench Nugent were based.

Disney was lucky that the British Militia regiments were being revived in the early 1850s since they provided undemanding jobs at various locations throughout the country. In 1856 Nugent was appointed Adjutant in the newly-embodied Second Staffordshire Militia and within a year he had found Disney a job there too as paymaster.[9] The family moved to Stafford.[10] We have here, therefore, an extreme case of how networks amongst the Anglo-Irish Ascendancy could smooth the passage of its members into positions in Britain. In 1861 the Disneys and Nugent were living next door to each other in Garden Street, a narrow but pretty and respectable street off the Wolverhampton Road.[11] Nugent himself moved into the local elite network and became committed to life in Staffordshire. On the night of the 1861 census he was socialising as a ‘visitor’ at Teddesley Hall, the seat of Lord Hatherton five miles outside Stafford. Also there was Hatherton’s son, Edward Littleton, the commander of the Militia and Nugent’s immediate superior. Nugent later became Master of the North Staffordshire Hunt and also a County Magistrate.[12] He remained single but it is clear that he merged the elite social network of Co. Westmeath with that of Staffordshire and integrated successfully and lucratively into the latter’s social life. He died in 1889, leaving a fortune of £13,327 (worth about £1.46 million at today’s prices). One of his executors was from Co. Westmeath in order to deal with his connections and inheritances there.[13] 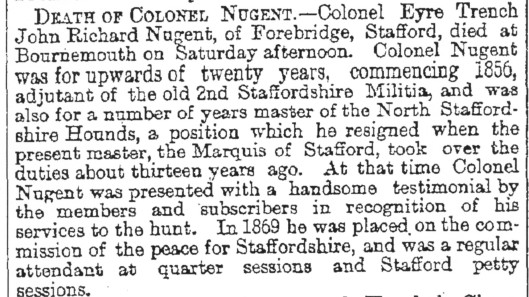 Trench Nugent in the Staffordshire elite, as described in the news item on his death in the Birmingham Daily Post, 7 May 1889.

The Disneys’ lives in Stafford

Members of the Disney family lived in Stafford for about eighteen years but, in contrast to Nugent, they ultimately proved to be long-term transients. They were never reconciled to leaving Ireland and to the loss of their respected status in the Meath community. They named their house in Garden Street ‘Clifton Lodge’ after their old home in Athboy, a clear sign of nostalgia for a lost past. There is little evidence that either Disney or his wife engaged with Stafford’s social scene or its organised religion. He did attend a ‘sumptuous and recherché’ Mayoral Banquet at the Swan Hotel in February 1867 but that is the total of the couple’s publicised activities.[14] That contrasts with Disney’s numerous recorded attendances at social and professional gatherings in Dublin.

By the time the Disneys arrived in Stafford Lambert was nearly fifty and Anna Henrietta forty-two. Given Lambert’s religious and class obsessions, we can assume that their gender roles were distinct with Anna performing the duties of a diligent but subservient home-maker. We have no specific evidence of their family relationships. The fact that Lambert stole away unseen in the middle of the night for his walk to Shugborough suggests his wife could not help with his depression and that they may not even have shared the same bed. Their daughter left home sometime after 1861 and she has not been traced subsequently. She may have emigrated.

Their son Lambert does seem to have had a loyal relationship with his father and, to some extent, followed in his footsteps. Just before the family moved to Stafford Lambert junior was commissioned as an ensign in his father’s Lancashire militia regiment. He transferred at that rank to the Staffordshire Militia but then joined the regular army. In 1858 he became an ensign in the 12th Regiment of Foot, but by 1861 he had transferred to the 69th Foot and become an instructor in musketry.[15] He subsequently served in India, Canada and Britain, as well as in Ireland. After twelve years’ service he bought himself out in 1871 but remained a lieutenant on the regiment’s reserve.[16]

Lambert Disney junior was serving in Britain when his father was killed. On the day after his death he arrived in Stafford to identify the body and support his mother. He was also anxious to preserve his father and family from the shame of suicide. That led him to write a letter the same day to The Times emphasising that ‘at the inquest the jury, on the most conclusive evidence, found a verdict of “accidental death”’.[17] He was responding to the paper’s first report of a ‘Mysterious Death’ which clearly hinted at suicide.[18] The letter’s tone was short, businesslike and unemotional. There is no specific mention of his father, just ‘the unfortunate accident’, and it suggests a stiff upper lip and, perhaps, a family in which relationships were stilted, even distant.

Four years later, in 1871, Lambert Disney junior was appointed Deputy Chief Constable of the Staffordshire Constabulary.[19] Local connections – presumably the Littletons or Nugent – must have helped get him the job. At the time of his appointment Disney was still single, and it is curious that in 1871 he was living in the Police Barracks alongside ordinary constables and sergeants. Why was he not living with his widowed mother in Clifton Lodge which was less than five minutes’ walk away? It suggests his relationship with his mother was not close, even in her lonely and declining years. She died just two years later aged only fifty-seven.[20]

Her son clearly wanted to leave Stafford once his mother had died in 1873. Within four months he had applied for the post of Governor of Swansea Gaol but was not appointed. He really wanted to get back to Ireland and in 1875 he succeeded by becoming Governor of Castlebar Gaol in Co. Mayo. After his years as a single man in the army and police force, Lambert junior then married a Dublin woman, Mary Isabella Dobbs, in 1881.[21] Tragedy was, however, to strike the family again. In December that year he became governor of Omagh Gaol in Co. Tyrone and he moved with his wife and new baby into the governor’s apartment at the Gaol. It proved to be his death warrant. The whole place was sitting in its own sewage – sanitary conditions were appalling. Within weeks Disney contracted typhoid and died.[22]

The heritage and identity problems of a Protestant family

The Disney family’s attitudes were determined by their original position in the commanding Anglo-Irish landed class that equated Ireland’s best interests with their own. An enforced move out of that secure position created stresses that ultimately shattered the family unit. They never seem to be reconciled to their exile from Ireland. Such a conclusion is often made in relation to Catholic Celtic emigrants but rarely in relation to Protestant ones. Yet the evidence clearly suggests it in relation to this family. They failed to settle in Britain for a number of reasons. Firstly, they experienced a drop in social status. They had enjoyed a privileged existence in Ireland as members of the Ascendancy but from a life networking with people at all levels of the Protestant establishment Lambert Disney descended to working in a back street barracks and dealing with the burghers of a small English town. Clifton Lodge in the Co. Meath countryside had been swapped for Clifton Lodge in a side street in Stafford. These changes must have been unpalatable to him and his wife.

Loss of status was the common lot of most Irish emigrants when they arrived in overseas destinations, and life was a struggle to rebuild in new and difficult circumstances. Things were usually far worse for the poor, Catholic and Celtic Irish. Protestants usually had an easier route to integration. So why did the Disney family remain apparent outsiders in Britain? The answer to this question must lie in the fundamental outlook of Lambert Disney and other members of his family. He was obsessed by perceived threats to his religion and his class in Ireland and in England. His practice of giving out religious pamphlets would not have endeared him to people in the barracks or the town and he was probably regarded as a crank. In 1866 he applied to be secretary of the Stafford Savings Bank but only received three out of twenty-three trustees’ votes and came bottom of their poll. That shows he had built up no significant constituency amongst the Stafford elite even though the Savings Bank had Protestant connections.[23] Finally, Disney may also have been suspicious of ‘corrupting’ influences in Stafford. That may explain why neither his wife nor daughter was recorded at social events in the town. The family remained aloof. Their son Lambert did make more of a go of life outside Ireland and even, for a time, in Stafford. Nevertheless, he had little commitment to it. After 1867 both Anna and Lambert Disney junior must have hated everything to do with the place. Anna Disney presumably died a depressed and broken woman, and after his mother had died Lambert junior wanted to get out and further his career back in Ireland.

The passage of Lambert and Anna Henrietta Disney through Stafford was affected profoundly by their attitudes and identities and it demonstrates how the influence of Irish origins was always mediated by the specific circumstances of the migrant family itself. The story of the Disneys and Trench Nugent shines a rare light on Ascendancy emigrants from nineteenth century Ireland.